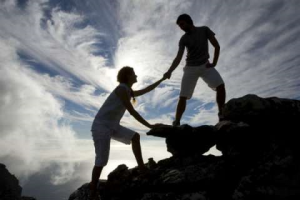 We know that the key to the throne room of heaven is the drab coat of humility.  No one is allowed before the King clothed in the pomp of their own importance.

But in humanity, how do you get there?

We live in a society of star-struck awe.  Just because a person is a television or film star suddenly they are quotable.  Really, what quality of their life is so full of integrity and character that we should immolate them?  The characters they portray on the big screen are make-believe.

Or if a person is on the platform at church and ever hold a microphone, suddenly that means that they are mini-celebs and if we can just touch them or be their friend then we can be important, too.  Granted, them having been trusted by somebody in leadership that allowed them that privilege speaks to a little about their life, but the only part of them that should be immolated is the part of them that reflects Godly character.

Is it our own desire to be famous that if we can just be their friend, even Facebook friend, then that will be a ticket to our own mark of “being a somebody?”

And for the target of this “fan adoration” what is their responsibility?  How can they not be overwhelmed with sheets of their own self-importance?  Why David was made the leader of a group of men when all he did was hide in the caves.  (Never mind that these men were the misfits and idiots who had been kicked out of Saul’s army which had its own way of keeping him in a place of humility.)

There may be even a little indignation, “do they not know who I am?”  I am always honored. I always should have a seat.  I should get stuff for free.  I don’t have to follow the rules. I am above the rules.  Though these words would never be uttered out loud, their actions scream it.  Oh, the curse that comes with honor.  An awful perversion of entitlement if one is not careful.  When they receive compliments, “Well, to God be the glory.  It is all Him.  Not me.”

The Bible says to “give honor to whom honor is due.”  The Bible also says God puts a king in place raise them up and putting them down.  That means God allows leaders to rise up and be known in our midst.

If you are one of the chosen ones, great is your responsibility to God and to others.

To avoid the trap of “false humility” and the need for God to knock you off of your perch of importance, humble yourself before Him.  You don’t have to get into the “I am just a lowly worm” rhetoric and tear down your confidence.  If God put you up in front to sing, to play, to speak, it because He knows you can do it.  Just don’t let that place be your identity.  Your ministry is what you do, not who you are.

Emote the emotions in prayer – create the emotions with words.  When you truly lift Him up and begin to behold His holiness, His glory, His majesty and get a revelation of Who He really is – wow, you realize how gracious He is and how honored you are to be chosen by Him.  You will begin to see your weaknesses and sin is exposed.

True repentance will posture your heart in a place of humility that no amount of emoting meekness or modesty could ever do.  Blessed are the pure in heart for they shall see God.

Think about this with me today:

Praise and criticism are TESTS of character.
You pass both the same way: humble yourself to God and show love to others. @ Rick Warren