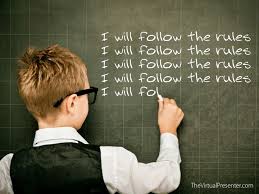 We live in a society today that HATES to be “told what to do.”  They buck against rules.

Call it what you want, rules, codes, laws, specifications, expectations, but without rules chaos would ensue.  Rules define a culture, a society, a team, an organization.  Whether these rules are intrinsic or obviously stated, they are there.  Even a playground full of kids given time will sort out a structure of function and organization that looks a lot like laws of operation or rules.  AND…. usually, there are going to be some leaders running the show.

But post-modernism preaches that “you are your own god” and nobody should be able to tell you what to do hence the rebellion against “rules.” For the Bible to say that there is a “right way and wrong way” to live is poison to the spirit of INTOLERANCE ruling in our culture. The Christian church has been subtly indoctrinated with the postmodern mindset to the point that she attempts to be RELEVANT by watering down the Word because it might offend someone who doesn’t see it the way they do.  Christians cop out of taking a stand for righteousness because they don’t want to JUDGE.

The Bible says we should love everyone.  It is because Jesus LOVED the Pharisees that He called them out on their sin.  He wanted their hearts, not their wonderful deeds.  He wanted a relationship with them that came from a place of love not meeting the criteria of a checklist.

But it didn’t mean that He didn’t follow the rules, too.  He not only followed the rules, commandments but lived them in Spirit.  Read the Sermon on the Mount.  He said if you love Me, you will keep my commandments.  He gave only one new commandment – to love others the way He loves us.  He obviously wanted us to show Him our love by keeping the Ten Commandments.

What about JUDGING?  Jesus is coming back as the Bridegroom, King, and Judge.  He wants us to walk in love and power and RULERSHIP.  How are you going to rule if you have no standard of right and wrong?  Jesus said to get the plank our your eye first, but He didn’t say “not to help” your brother with his speck.  There are scriptures that say to test/challenge or help your brother in error.  How can you evaluate something without judging?  The secret to being pure in making judgments is just to make sure your life is “above reproach” and you are humble to receive correction.

Once again our postmodern society has been made gun-shy about “contradicting” or “correcting” others by a small vocal majority.  Authority figures are mocked instead of respected. Conflict is avoided and the price is a culture with vague boundaries with gray areas and people striving to be POLITICALLY CORRECT.  Christians become so self-absorbed that they want to protect their own reputation from being labeled as an extremist or from looking too different from the Babylon where they live.  Christians were called to be salt to preserve their society and light to show others the way to truth. How can you be salt and light if you don’t have a clear picture of what your salt shaker looks like or you have a flashlight with a weak battery?

Laws are a reality.

Failure to conform will have consequences either here or in eternity.