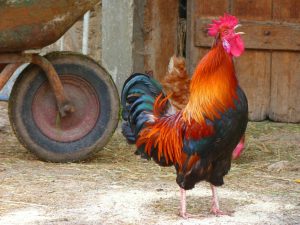 We call him an apostle.  Some know him as St. Peter.  The Bible mostly refers to him as Peter.  But Jesus called him Simon.  We have all heard the stories of him being a rough character but bold as brass to boldly preach on the day of Pentecost.

For years I have heard the story of the rooster that marked his failure.   (Which is pretty amazing to ponder.  What if there were a loud “gong” to go off to mark when we failed our spiritual test? Or a bright flash over our head – “oops.”)

Jesus knew Peter was going to have the test.  He even knew He would fail.  Jesus did not pray for him to avoid the test but that when he was tested that “his faith would not fail and that WHEN (not if) he returned that he would strengthen his brothers.”

And Peter blew it.

The guy we know as BOLD and Brassy was so scared the night Jesus was taken that he denied even knowing Jesus to a young girl.                         Here was a man, who in his previous occupation, was a brave and successful businessman, braving the choppy seas of Galilee as a fisherman, lying to a teenager.  He finally even cussed to prove to those around him that he was not a follower of Jesus.

Then he got the wake-up call.

The rooster crowed and Peter came face to face with his shortcomings.  The Bible says “he wept bitterly.”  Can you imagine how his heartfelt when he locked eyes with Jesus that night right after he had severely messed up?  Was he no better than the rest of the guys on Jesus’s team?

He saw his leader beaten and crucified with the knowledge that he hadn’t even had the courage to stand up for Him when the going got tough.  He had promised to even go to prison or death with Jesus.  He had thought of himself as better than that.  He knew Jesus was perfect but he was hanging out with a group that some could have called hypocrites.  They all claimed to be in it for Jesus but on the outside, it sure looked like they may have had some self-interest issues.  James and John jockeyed for the power position to be Jesus’s, right-hand man.  John called himself “the one who Jesus loved.”  (We can all have that position if we just understand how to open our hearts to receive it.)  They were a bunch of scaredy cats during a storm.  They thought he was the ignorant one because he was not formally educated.  (Isn’t it great we don’t have to be perfect to follow Jesus, just willing?)  But on that night he faced the inadequacy of self-confidence grounded in self-love and self-preservation.  He was no different than the rest.

But Jesus knew what was in Peter’s heart, in his destiny, even in that place of failure.  He was sad about Peter’s choice but Jesus did not stop believing in Peter.  He knew that underneath the disappointing behavior was a deep-seated love that would be a homing device to bring Peter to the center of his purpose as a wholehearted lover of God.  A whole-hearted lover does not count the cost.

So what did Peter do?  He gave up and went back to doing what he knew how to do before Jesus.  He went back to his fishing business.  It probably wasn’t because he needed the money either.  Jesus had just been gone 8 days.  But when the morning came, Jesus was on the shore waiting for him and the other disciples.

Peter was so excited to see Jesus.  He even jumped overboard to swim to shore.

What do you think he said to Jesus when he ran up to him on the sand?  What do you think they talked about during their breakfast?  Then came the moment that would make your heart stop.  Jesus looked directly at Peter and said, “Simon.”  Oh-oh.  Here it comes.

How could he not forget the image of the look on Jesus’s face that night when across the courtyard he had turned and looked at him.  But instead of eternal damnation, Jesus with compassion three times asked him if he truly loved Him.  Jesus knew the answer.  He needed Peter to know the answer not just in his mind but deep down in the belief system of his spirit so that he could follow Jesus this time not out of a place of cocky independence but a humble dependence.  Jesus knew Peter needed to know “Yes, he did love Jesus” and this time it would be different.  He would lead the brethren and the next time he faced the accusers, he would not deny Jesus because he understood love – the price of love, the grace of forgiveness and the empowerment that comes from knowing the acceptance of God that restores.