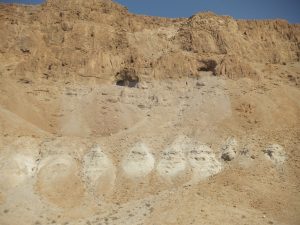 David had fifteen years of preparation from the time that he was anointed until he took the throne.

During that time, the king first embraced him and then turned against him even trying to kill him by putting a bounty out on his head.

David was the apple of God’s eye.  Why did God not immediately take care of justice?

David even had the opportunity to kill Saul in the cave.  All he did was cut off a piece of his robe.

David’s followers were blown away.  In man’s eyes, David had “every right” to defend his own honor and kill the one who had tried to hurt him.

Yet, God corrected David for even cutting off a piece of Saul’s robe to prove his point of “Yeah, I could have killed you if I would have wanted to.”  David was proud of his own godly response to the situation.  But God wasn’t totally pleased.

God said, “Touch not mine anointed.”  At that point in Saul’s life, he had already allowed his impatience and ego to overrule his judgment.  He knew that a sacrifice needed to be offered; he was irritated that the priest wasn’t getting there fast enough, so he did it himself.  It cost him his kingship….EVENTUALLY.  It was fifteen years before God removed him.  It was fifteen years of an unchecked power trip before once and for all his sins caught up with him.  (During that time, although his assignment was changing, was God still being long-suffering with the heart of the man, Saul?)

In reality, David wasn’t ready to be king at the point he had been doused with anointing oil.

God still had somethings he needed to teach David to be prepared for the throne.

God wanted David to rule with a pure heart.

A pure heart comes with time.

It is a process.

David was a man after God’s own heart, even in his immaturity when he made mistakes.  The kingship to him was simply an assignment that gave him the opportunity to establish a place for more people to come to know the God that he knew.  David had intimacy in worship with Jehovah that was not common in those days.  Through worship and the celebration of the Word, the people came to know new revelation of God.  Because David was king, he had the resources and authority to establish such a house of place.

With David, let us pray,

“Search me, God.  Search my heart.  Let the intentions of my heart – the reason why I do things – not be filled with selfish ambitions or anxiety.  Give me a right attitude.  Help me wait patiently for you to perfect your will in me.  Help me to trust You and that the ones you have put in leadership – you will guide them, you will direct them because they are yours. And even if the opportunity arises for us to lop off a piece of their robe, let our tongues cling to the roof of our mouth if our words will cut with criticism. Let us contend in prayer, with a heart of faith that does not become weary, until we see the fulfillment of your heart and justice for your people.”