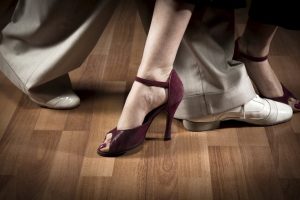 Do you ever feel like the rhythms of life have gone from a gentle waltz to a frenzied, wild two-step? Spin after spin leaves you dizzy and panting for breath and gazing at the band wondering when the song would be over.

To dance is to move rhythmically in a pattern of steps to music.

So what is the pattern?

What are the steps?

What is the music?

Who is leading the dance?

I recently experienced the whirling of a dance in the grip of a dance partner that I knew was not of this world.  I cried out to God for clarity and understanding because my heart was hurting and my head was full of confusion.  I knew it was not the person involved in the conflict.

Why, why, why was the dance not ending?  I felt like I was stumbling and starting to fall.  The only thing that I knew for sure was that I had to be quiet to focus on the dance.  “Be still and know that I am God” took on a brand new meaning when it meant to quiet the roar of my soulish offenses to hear the still small voice of the Spirit.

Feeling the victim in the crazy, swirling beat, it was a sobering moment when I finally heard the Lord say, “Don’t Dance With Jezebel.”  The scripture, “For our struggle is not against flesh and blood, but against the rulers, against the authorities, against the powers of this dark world and against the spiritual forces of evil in the heavenly realms.”  Ephesians 6:12, became all too real.

Who was Jezebel?  Jezebel was a woman in history, the queen of Israel married to Ahab who personified a spirit of manipulation and control often referred to as witchcraft.  She was a ruler in the land of the Lord.  She sought to kill the prophet.  When Ahab wanted someone else’s vineyard, she had the owner killed.  It was not enough to share the produce they wanted to possess the source by whatever means it took to have it.  She promoted worship to Baal which was filled with cultic immorality.  She threatened Elijah and the force of her threat intimidated the mighty brave prophet and he outran a horse in fear.  He hid in the cave and his response to the attack caused the Lord to shift focus to raising up a successor.

To say I was stunned fails to adequately describe the seriousness of my moment before the Lord when I heard Him say, “Don’t dance with Jezebel.”  I thought Jezebels were immoral.  I had not been immoral. Feeling the victim, the Lord was telling me I was not without responsibility for the wild cadence of my natural reality.

The Lord told me that because of where I worked and having been raised in the church, just by association I had been in agreement with the spirit of Jezebel that was tolerated in both environments.  Even though I had sought to separate myself from the organizations, I had never broken the agreement with the spirit’s manipulation and it still had legal ground to rise up and jerk and pull and toss me around.  Because its voice was so familiar, I even participated in her demonic two-step and was blind to the source behind the mask.

My heart broke to see my sin exposed in the depths of my heart.  I so want to be a pure vessel.  I want the water from the well of my soul to be sweet and full of life.

I wanted out.  I wanted the crazy dance to be over.  Obviously, the Lord was testing me and bringing out the fire to purify my heart.

I asked God to lead me to freedom and my research on the internet led me to some respected resources and fellow travelers who shared their experiences and revelations.

JEZ-B-Gone is the prayer strategy that God gave me to be free. If you are interested in my prayer strategy to disentangle myself from the Jezebellic agreements and to end the dance, send me a message through the contact form.  I will share.  No one should be stuck in the rhythms of a Jezebel dance.